
Emil Lindholm is the World Champion of the WRC2 Junior class 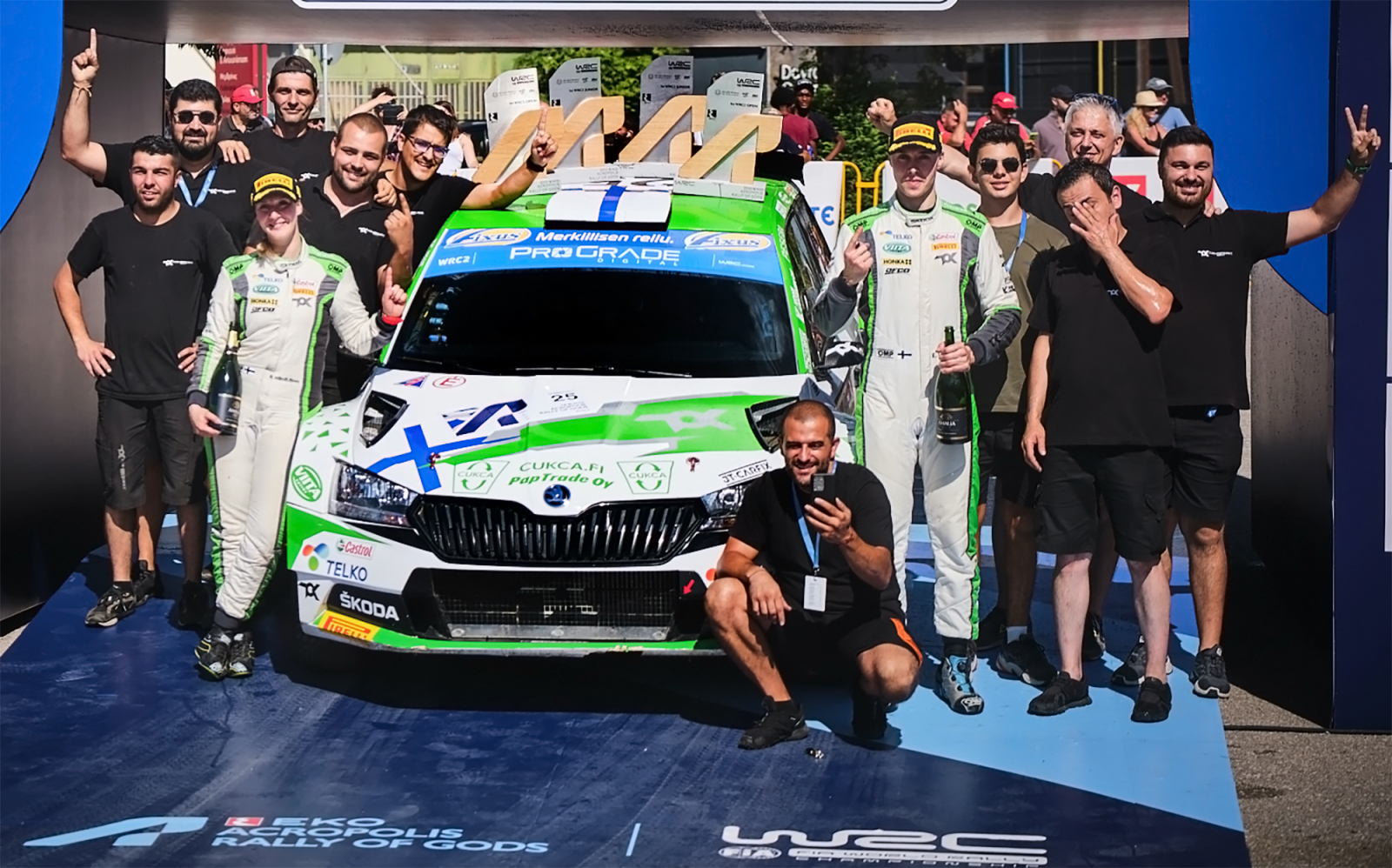 Toksport WRT's Emil Lindholm has already secured the WRC2 Junior World Championship, for drivers under 30 years old, before next weekend's WRC Rally RACC Catalunya - Rally de España. The only threat to the championship, the British Chris Ingram, will not drive in Spain or in the season-ending round in Japan. Lindholm will start the last two WRC rallies of the season with an unattainable points lead.
Team GRX's Emil Lindholm will start the WRC Rally RACC Catalunya - Rally de España as the new WRC2 Junior class’ World Champion. The World Championship points of the WRC2 Junior class, built for drivers under 30 years of age, are calculated from the points of the best six out of the seven WRC rounds.
Lindholm, who has driven five rounds among the top drivers of the series, can still count points from Catalunya, or the season-ending WRC Japan, to his total points. Lindholm’s biggest threat, Chris Ingram, who has already driven six rounds, will not start in Spain or Japan. Nikolai Gryazin, driving third in the series, can count points of one more WRC round to his final points, but the difference to Lindholm is unreachable.
Lindholm, who is preparing for the World Rally Championship round in Catalunya, was of course happy about the news.

- In relation to the WRC2 World Rally Championship program, the WRC2 Junior World Championship was my main goal. Great news! However, our goals have increased over the course of the season and right now our number one goal is to drive together with Reeta for the WRC2 class world championship. The WRC2 Junior championship is a nice intermediate goal, but we aim higher. It's nice to say already at this stage that the WRC season has been successful according to expectations, Lindholm reminds.
At the same time, Lindholm confirms that he and Reeta Hämäläinen will also drive on the 10th–13th of November in the WRC Rally Japan, which ends the World Championship season.
- Many thanks to Toksport WRT and all my supporters for allowing us to compete also in the last round of the season in Japan.
Before Japan, in the coming weekend, Lindholm has one of his favourite rallies ahead of him - WRC rally on the asphalt roads of Catalunya, Spain.

- I really like the Catalan World Rally Championship. My previous track driving experience is useful here: the rally is run on smooth, well-maintained asphalt roads. This rally is a bit like racing on a track. The tests went well. We drove a couple of days of test over the weekend and right from the start our car felt good. We tried small changes, but we ended up pretty close to last year's adjustments, says Lindholm.
Lindholm says that the World Rally Championship tire supplier Pirelli is bringing a new asphalt rally tire to Spain.
- There was tire wear in the tests, but the new tire lasted well. The performance of the new tire was really consistent throughout the usage of the tire.
Andreas Mikkelsen, leading the WRC2 class, has already driven all seven World Championship rallies that entitle him to championship points. Therefore he will not participate in the last two rounds of the season. Third in the series, 20 points behind Mikkelsen, Lindholm can count all the points from either one of the last two WRC rounds to his total points and improve the result of the Swedish World Rally (3 points).

- We are going for a good result. The most important thing for us is to be second in the WRC2 class in Spain, seven points ahead of Kajetan Kajetanowicz. After that we'll see what else is required of us.
- We’re going out to enjoy the Catalan asphalt roads with relaxed minds. You can do well with a good driving feeling and good notes, Lindholm reminds.
The WRC Rally RACC Catalunya - Rally de España starts on Friday at 9:33 (UTC+3). A total of eight special stages and 118.92 special stage kilometers will be run during the day. The rally continues on Saturday with seven special stages (118.75 ss-km) and ends on Sunday, when the program includes four more special stages (56.10 km). The final Power Stage of the rally (15.90 km) starts at 13:18 (UTC+3).
WRC2-class World Championship points:
1. Andreas Mikkelsen (NOR) Škoda 109
2. Kajetan Kajetanowicz (POL) 96
3. Emil Lindholm (FIN) Škoda 89
WRC2 Junior-class World Championship points:
1. Emil Lindholm (FIN) Škoda 108
2. Chris Ingram (GBR) Škoda 92
3. Nikolai Gryazin (ANA) Škoda 79