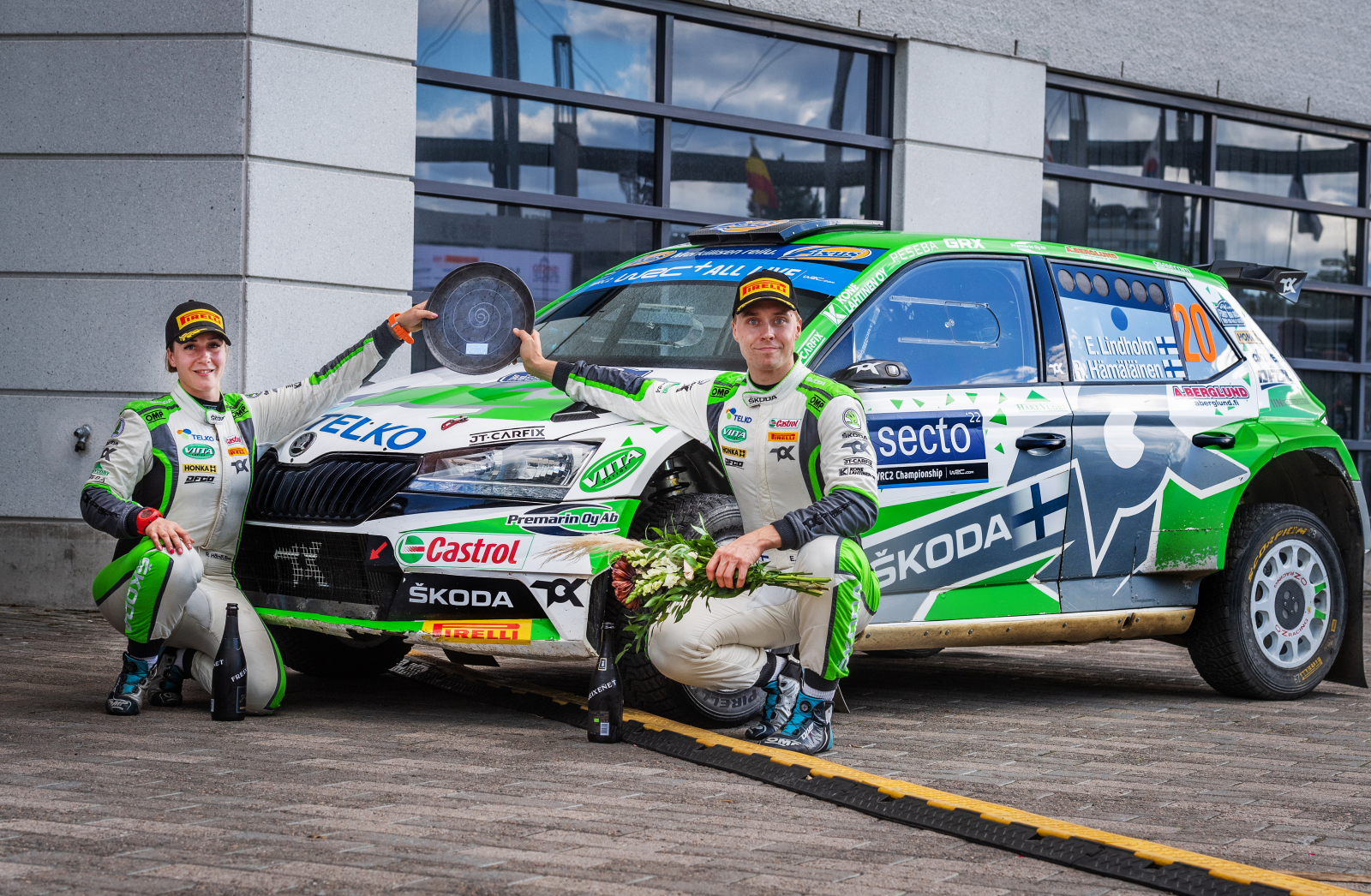 Toksport WRT's Emil Lindholm and Reeta Hämäläinen drove their Škoda Fabia Rally2 Evo to second place in the WRC2 class and ninth in the overall competition of WRC Secto Rally Finland. Lindholm’s second place puts him in lead of the WRC2 Junior class’ World Championship points and fourth in the WRC2 Championship standings.
Toksport WRT's Emil Lindholm and Reeta Hämäläinen fought for the win of the WRC2 class until the very end of the rally. After 22 special stages of the competition, the first place in the class was only 7.7 seconds away.
Team GRX’s duo got 19.7 seconds behind on the opening day of the rally on Friday and were unable to close the gap.

- The second place is disappointing. We went after the win but Teemu (Suninen) got away from us for too long on Friday. Even though we caught him a bit on Saturday and Sunday it wasn’t enough. In the last special stage we had a slow puncture on the left rear tyre and it took a few seconds from us.
When the grip was good in the rain, Lindholm clocked fastest times. In a dry weather where roads were clean of loose sand and gravel the car’s settings worked great, but Lindholm´s own driving style left something to think about. According to Lindholm, his style was not entirely suited to these driving conditions.
- I'm used to driving as the first car in the loose gravel in Finnish Championship series. My driving style on loose gravel lets the car go and skid to the sides, because then the tire bites better in loose gravel. We went to Jyväskylä with similar settings as we drive the FRC rallies. When we drive in WRC series in starting order 15–20 the grip in the grooves and rutsis better and it should be used to our advantage better in the future, Lindholm summed up.

The second place in the WRC2 class moved Lindholm from seventh to fourth place in the World Championship points and to the top of the leader board in the WRC2 Junior class.
- Of course being at the top of the WRC2 Junior class’ standings is a great thing and a small consolation. The situation in that series is quite good. We also scored important points to our team Toksport WRT. The victory was painfully close and deep down I believed I would win here. There's nothing you can do and we didn’t loose to a bad driver. I want to say thank you to our team for a good car and a big thank you also to all of our partners who make all this possible, Lindholm reminded.