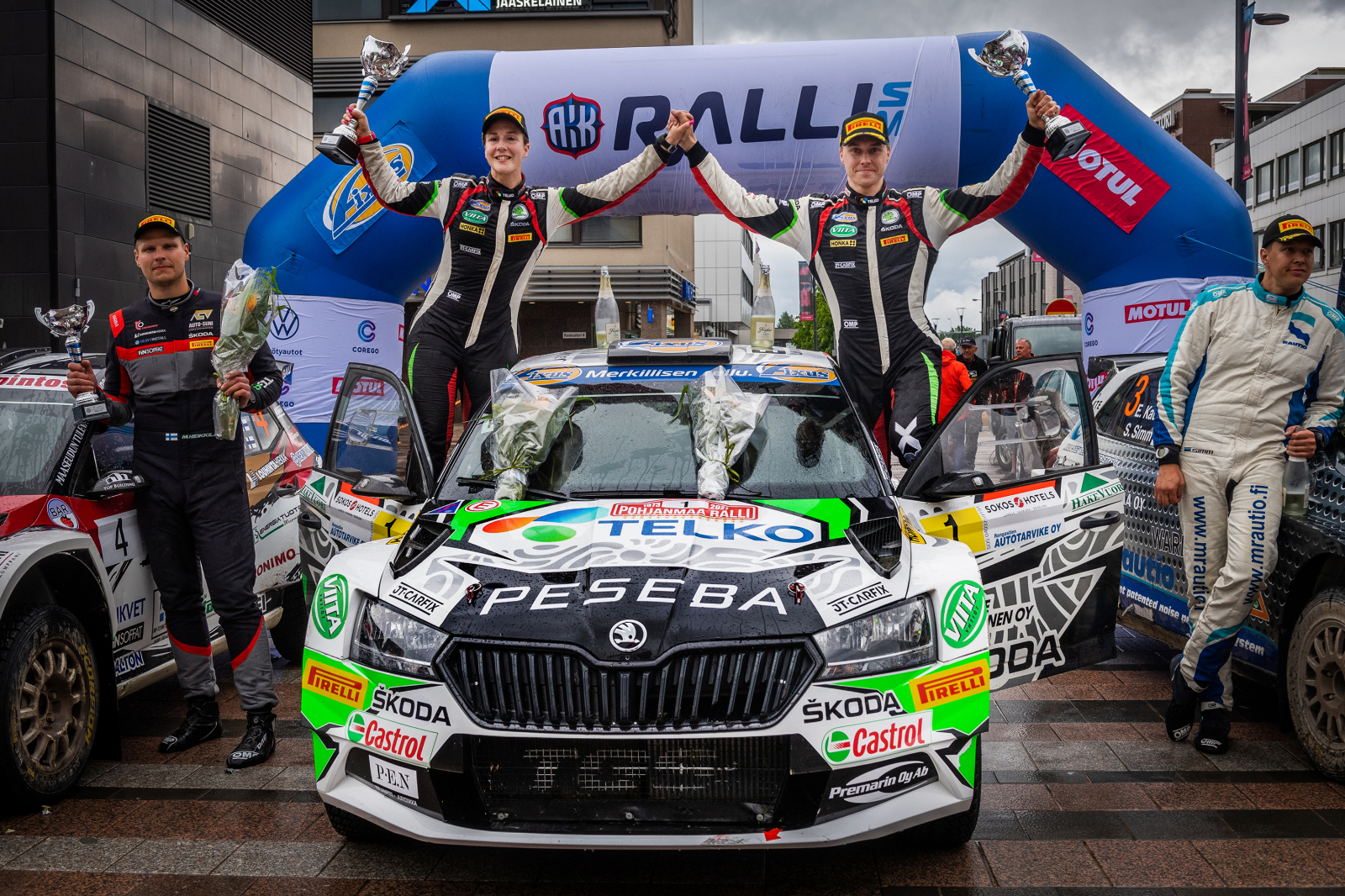 Team GRX’s duo Emil Lindholm and Reeta Hämäläinen successfully defended the victory of the SM Pohjanmaa Rally in Seinäjoki. With his third win of the season, Lindholm continues at the top of the SM1-class with 104 points. The difference to Estonia's Egon Kaur increased to 24 points.
The victory of the second rally of the summer season, Pohjanmaa Rally, was decided in the last special stage of the race. In the two-day rally, Emil Lindholm and Reeta Hämäläinen, who were second with their Škoda Fabia Rally2 Evo after the opening day, rose to the rally’s victory after the eighth and last special stage (20.0 km).
Škoda's Mikko Heikkilä, who started the last special stage with a lead of 4.8 seconds, almost spinned on the wet road dampened by rain, and lost some time. Lindholm pushed hard with his Škoda driving the fastest time, 11.7 seconds, which lifted the duo to the third championship victory of the season.

- Nice and challenging roads. Conditions were difficult, especially on Saturday due to rain. We didn’t have any real expectations for this rally, but the win is always good. I guess I was that nervous, that when the rally started on Friday’s first special stage, I took a false start, which is the second of its kind in my career. I took the first false start in Rovaniemi, if I remember correctly, at the start of Aittajärvi special stage in 2017. When you immediately get 10 seconds penalty, it is not easy to bounce back. We really had to push it.
- With the exception of the false start, the rally went well. After the Finnish Championship rally in Turku, it felt like we had better grip and a good feeling to drive. We drove like we’re supposed to drive in Finnish summer rally, Lindholm said.

The pace at the top of the rally was fast all weekend. Heikkilä drove the fastest time for the second to last special stage, but Lindholm went past him on the last special stage and rose to the third Finnish Championship victory of the season.
- We didn't take any risks in the last stage, even though it felt pretty wild at times. Too bad for Mikko. The victory was a pleasant surprise for us and I am certainly pleased with it.
The rain that started on Saturday lasted until the finish of the rally. The route was wet and partly muddy and slippery.
- The grip was okay in the morning but as the rain continued, the weather became really challenging. At times there wasgravel with traction and after that mud and large puddles of water, which felt driving through like “Lord have mercy”. The grooves of the cars that started the special stage before us, threw our car all over the place.