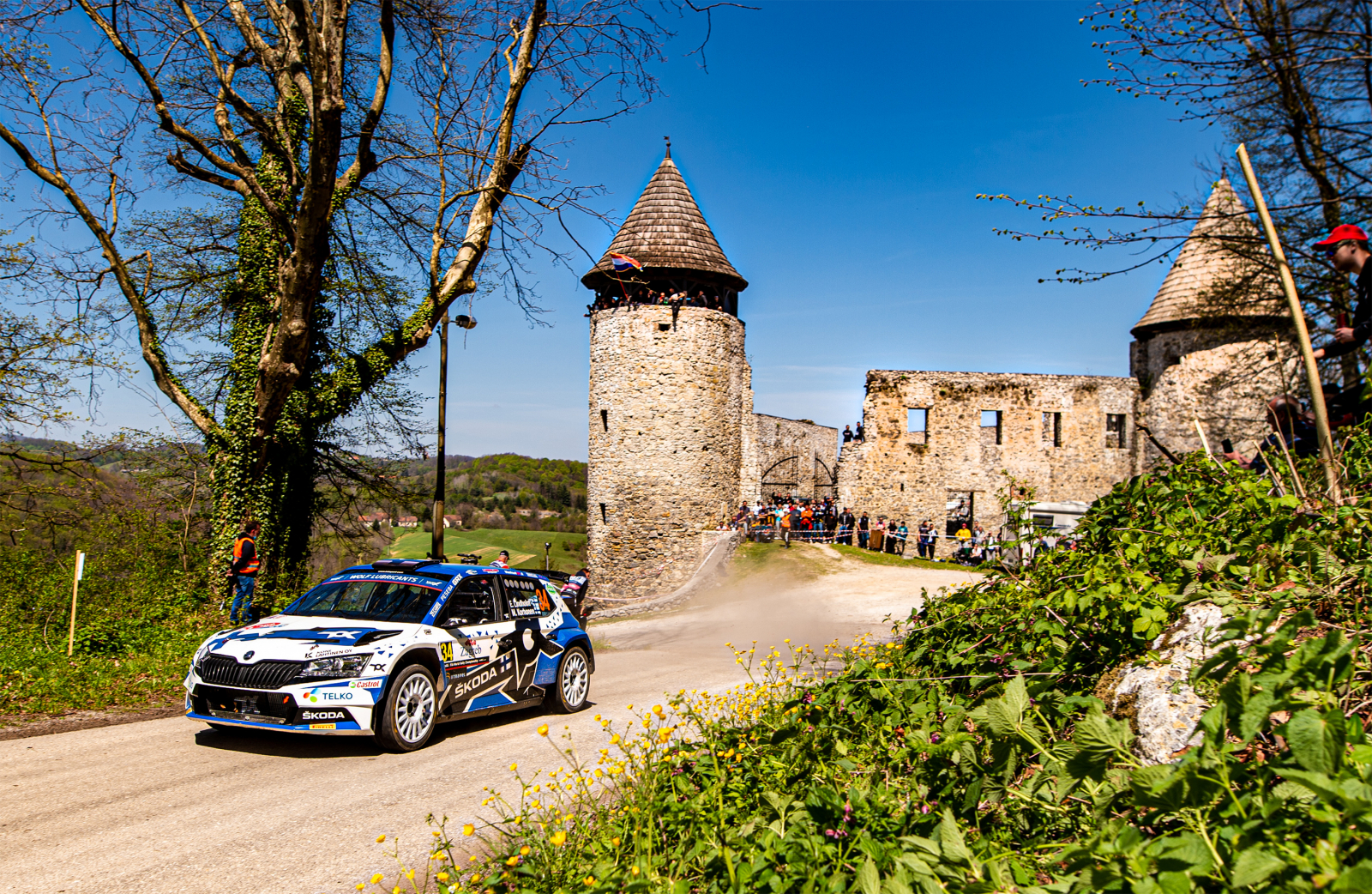 Team GRX’s Emil Lindholm and Mikael Korhonen scored first World Championship points of the season, finishing second in the WRC3-class and 13th in the overall competition in the WRC Croatia Rally. Lindholm is driving seventh in the WRC3-class overall standings.
Emil Lindholm and Mikael Korhonen, driving Toksport WRT team’s Škoda Fabia Rally2 Evo, held the second place in the WRC3-class until the finish line. On the closing day of the rally the Finnish duo had one incident with a flat tyre, which did not bring any changes to the final results. In the overall competition of the rally the pair placed 13th.
“I drove carefully, but we still suffered a flat tyre on the second special stage of the day. Our choice of tyres for the morning was wrong. We thought the hard compound would work well but Power Stage in particular was such a narrow road that we didn’t get the tyre temperature high enough and the grip was poor”, Lindholm says.
“We decided with the team that the best thing to do is to bring the car surely to the finish line. That’s why we weren’t pushing that hard on the Power Stage. We got two points from there, however the gap to the fastest time grew pretty big. We still made it through”, Lindholm reminds.
The Finnish duo started the opening day of the rally by driving the second fastest time for the opening special stage. In the second special stage, which was the longest (23.76 km) of the day, the duo suffered a flat tyre before the second half of the special stage and lost their chances for the winning battle. With eight stages on the opening day’s programme, Lindholm drove three fastest and three second fastest times.
On Saturday, also with eight special stages, Lindholm clocked the fastest time on one special stage and was the second fastest in three special stages of the WRC3-class. There was one close-up situation for the day, after which Lindholm decided to drop his pace a little bit to secure his second place on the podium.
“Our goal was to drive here to the podium and that goal was fulfilled. It was known that if everything goes well then there is a chance of winning. There were too many tyre breaks and they must be avoided in the future.”
Next time Lindholm and Korhonen will be seen driving Toksport WRT’s Škoda is 20th-23rd of May at the WRC Vodafone Rally de Portugal.
Final results: WRC Croatia Rally, WRC3 class
1. Kajetan Kajetanowicz – Maciej Szczepaniak (POL) Škoda Fabia Rally2 Evo 3:03:23,8
2. Emil Lindholm – Mikael Korhonen (FIN) Škoda Fabia Rally2 Evo + 1:14,6
3. Yohan Rossel - Alexandre Coria (FRA) Citroën C3 Rally2 + 2:41,4
4. Nicolas Ciamin – Yannick Roche (FRA) Citroën C3 Rally2 + 3:04,6
5. Chris Ingram – Ross Whittock (GBR) Škoda Fabia Rally2 Evo + 4:24,4
WRC3 Class Overall points:
1. Yohan Rossel (FRA) Citroën 48
2. Nicolas Ciamin (FRA) Citroën 36
3. Kajetan Kajetanowicz (POL) Škoda 28
…
7. Emil Lindholm (FIN) Škoda 20